Does The Use Of Racist Comments Warrant Dismissal? 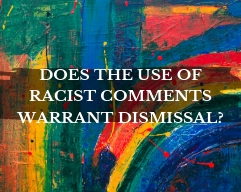 Is dismissal the appropriate sanction for an employee who utters racist comments in the workplace?

The Commission for Conciliation, Arbitration and Mediation (“CCMA“) recently heard the case of South African Commercial, Catering and Allied Workers Union obo Maribe v Flamingo Casino [2019] a BALR 433 (CCMA) in which Tshepo Maribe (“the Applicant“) was dismissed from Flamingo Casino (“the Respondent“) for making racist comments during a disciplinary hearing.

The Applicant was employed as a “tables dealer” at the casino. On 16 May 2018, the Applicant acted as a representative for a fellow colleague, Edward Kaizer (“Kaizer“), at a disciplinary hearing. Both the Applicant and Kaizer are black.

The disciplinary hearing was chaired by two white employees of the Respondent – Jaco van Wyk (“Van Wyk“), the Health and Safety Officer for the Respondent and Petro Pearce (“Pearce“), the Food and Beverage Manager.

The disciplinary hearing resulted in Kaizer’s dismissal. Upon its conclusion, the Applicant allegedly uttered the words “I stand by my statement, I am not going to appeal here, I am going to appeal to the CCMA, this is a racist issue” (“the first statement“).

Van Wyk testified that he took the statement as a racist comment as similar comments were made by the Applicant in previous disciplinary hearings in which the employee was black and Van Wyk was the white chairperson.

Pearce testified that after the disciplinary hearing the Applicant left the boardroom and she overheard him tell his colleagues that “they [should] be careful as they will be dismissed because they are black” (“the second statement“). Pearce perceived this to be a racist comment too as it was made to black employees only who all reported directly to her. The Applicant’s statement meant that employees would be dismissed by white management simply because they are black.

A disciplinary hearing was held for the Applicant in which he was found guilty for the racist comments uttered on 16 May 2018. The Applicant referred a dispute to the CCMA.

The Respondent argued that it had proven that the comments made by the Applicant amounted to racism. The comments were proven to be racially inspired due to the circumstances in which they were uttered as they had been made immediately after a black employee was dismissed by a white chairperson.

The Respondent relied on Oerlikon Electrodes SA v CCMA and Others [2003] 9 BLLR 900 (LC) in which the Labour Court held that “racism will not be tolerated within the workplace”. The CCMA held further that even “seemingly small acts of racism will not be tolerated and that employees can face dismissal if found guilty of same”, even in the absence of a disciplinary code expressly providing for it.

After hearing the evidence and testimony of both parties, the commissioner noted that it was not disputed that the Applicant had uttered the second statement.

The issues to be determined were: whether the Applicant uttered the first statement; and whether the first and second statements were racist comments.

The Commissioner held that the Respondent’s version seemed more probable than that of the Applicant. He held further that after being frustrated at the outcome of the disciplinary hearing, it was highly probable that the Applicant uttered the first statement and then proceeded to warn his fellow colleagues that this may happen to them in the future, i.e. the second statement.

Were the comments racist?

The commissioner held that it was clear that the message that the Applicant wanted to convey to his colleagues was that their dismissals would be race-related. He was not referring to simply any employee of the Respondent but identified them by race.

The commissioner stated that even if the statements were not made in the presence of white employees, the use of the word “black” in that context was racially loaded. It would be unreasonable to conclude otherwise.

The Court in Rustenburg Platinum Mine v SAEWA obo Bester and Others [2018] ZACC 13 laid down the test for whether words are racist. The test is “whether, objectively, the words were reasonably capable of conveying to the reasonable hearer that the phrase had a racist meaning”.

Does the use of racist comments warrant dismissal?

The commissioner noted that racist comments have no place in society and the workplace. Such comments simply cannot be tolerated. He noted that “the comments had racist overtones that sought to destroy [the] harmonious working relationship of mutual respect and [the] embracing of different races within the workplace”.

He held further that “employees have a duty not to undermine harmonious working relations”. The Applicant’s statements did exactly that. These statements have the potential to tarnish the Respondent’s reputation and jeopardise its business interests. The commissioner held further that the Applicant had shown no remorse for his actions and his dismissal was appropriate under the circumstances and accordingly substantively fair.

IMPORTANCE OF THE CASE

Racism is not tolerated in society and especially not in the workplace. Employers are, where circumstances so warrant, entitled to dismiss employees for misconduct for making racists statements at work.